Happy Wednesday to you.

I normally like to do lots of baking in the run up to Christmas but because of all the crazy knitting I was doing I just didn't have the time.  This has changed now that Christmas is over and I have been baking a few bits and pieces.  Last night, for instance, I quickly knocked up the Nigella marzipan Christmas cake.  I did it because Paul's coming tonight and we didn't get a Christmas together so we're going to make up for that now.  I can't tell you how nice the kitchen smelt while it was baking and I may just have to make a few Christmas things throughout the year now :)

Anyway, the week after Christmas I found a couple of apples at the bottom of the fridge that Maddie refused to eat (she's like that if they've been there for more than a day) so I put my thinking cap on and came up with this: 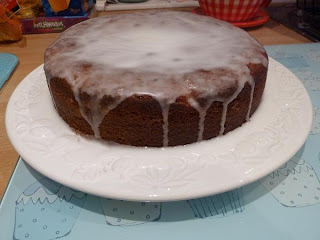 I beat together 6oz of butter and 6oz caster sugar then I added 3 beaten eggs a bit at a time.  I folded in 6oz of self raising floor, 1 tsp baking powder, 1 tsp cinnamon and 1 tsp of vanilla essence.  I put half of the mixture into a cake tin, grated 2 Braeburn apples over it then put the rest of the mixture in.  I baked it at 180 for about 35 minutes and left it to cool.  Once it was cool I drizzled icing, made of 4oz icing sugar, 1 tbsp of lemon juice and enough water to make it a but runny. 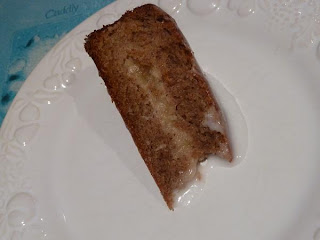 And it was delicious.  Maddie doesn't like cooked fruit and neither does my friend Clare but they soon wolfed it down!  It made a light alternative to a cake filled with butter icing and I hope some of  you may try it yourselves.

Today, in keeping up with being spontaneous, I went to the pub after work!  Now I'm off to get ready before Paul arrives.

Thanks for stopping by, hope you're all well
Jo xx
Posted by Jo at 19:56

Yum, that cake looks yummy!! Have a lovely evening with Paul. x

yummy cakes - good idea to use up the apples

I can almost smell it from here..

Ooh your cake looks lovely Jo. Ok you're on with the race to make the bag! Although I'm at a disadvantage, with nowhere to put my sewing machine yet!
Fi xx

The cakes look lovely and tasty. Glad you got to spend some time with Paul. I have a plan to make some Christmas stuff through the year (erm, I planned to do that last year as well and failed!!)

love the idea of grating the apple in the middle. will need to try that with my two :)

They look amazing. I planned to do a little baking (and break tradition). However,I failed again and now have the ingredients beckoning from my cupboard. I am wondering how I am going to bake and go back on my weight loss plan. Hum!

I love baking and I especially love the smell is makes but I need to find some things that I don't like to actually eat! Hope your resolutions are going well. xx