It's that time of the month again, it's Story Telling Sunday over at Sian's!

I've known for weeks what my story will be and I can't wait to share it! So without further ado here is my precious: 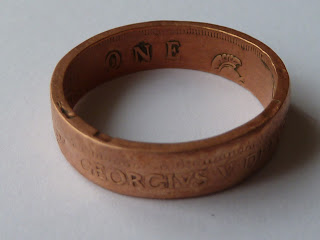 It's a penny ring, made from an old penny! A penny that has been carefully molded into a ring so that all of the original markings remain, not melted and re stamped but manoeuvred into shape, amazing! 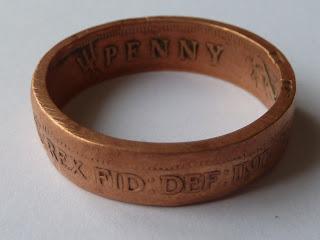 My dad gave it to me 25 years ago and told me how a friend of his had made it from an old penny. I look at it and think of my dad and remember the exact moment he gave it to me, where we were sitting, what the weather was like and what he told me about it.  Well, I remembered everything apart from the name of the person who made it, a friend of his whose name escapes me. 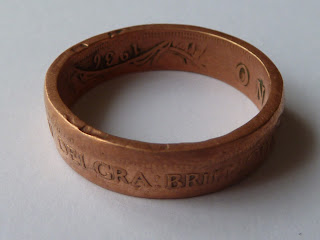 Granted, it's somewhat crude but I love it and I've kept it safe for all of these years. 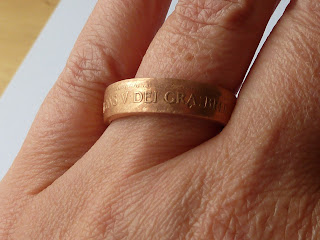 Even though it's far too big for me.

I recently took it over to show my mum, hoping she could fill in some blanks but, it turns out, she has never seen the ring before!

The one big thing I do remember is that it was made when my brother, Jon, was born.  Now my brother was born 40 years ago tomorrow so this little ring has been around for a while but it seems I'm the only living person who knew it existed.

It's was Jon's birthday party yesterday and I knew in a heartbeat exactly what his present would be, after all, it was made to celebrate his birth!  It was very emotional telling him the story of the ring when I gave it to him and gave him, in effect, a gift from his dad who had passed away 5 years ago. 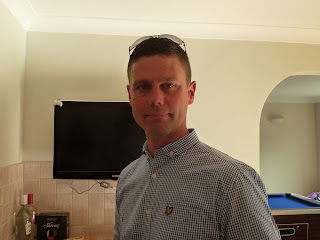 I think know he loved it though. I also know it will be well looked after by him and I also know that sharing it with him and showing the rest of the family this little ring has made it all the more precious.

Now it's your turn, head over to Sian's and let's hear your story.

Thanks for stopping by
Jo xx
Posted by Jo at 10:04

That is a very precious ring. It is a very unusual ring and very clever. We collect the rolled and flattened souvenir pennies, but this is far better! AMAZING!

Oh, wow..this is one very special story. I can see why you have been looking forward to telling it. I love how it looks backwards and yet forwards at the same time. A circular story for a magic ring!

Such a precious ring, I have a tear in my eye!

That is a lovely thing to have and to have given away to exactly the right person. Great story.

What a lovely story & a wonderful gift for your brother x
Many thanks for sharing Jo.

Oh how lovely to have such a thing to give to your brother. Both so he can look it at it and remember your Dad and of course to know how celebrated his birth was :)

What a wonderful story! So pleased that your brother loved the ring too :-)

What a wonderful ring, a great story of your father's gift, and the perfect gift for your brother on his birthay!

How generous to have given away a special possession from your dad. I'm sure your brother will cherish it too. I love the idea of making a ring from an old penny. I've never heard of that. Thanks for teaching me something new!

A very special story and what a fabulous birthday present to give to your brother.

What a wonderful story! How precious that would be on a scrapbook page.

That is such a lovely story - and how wonderful that your precious is now precious to another part of your family. You brought a tear to my eye reading it. Thank you for sharing.J x

What a wonderful story.....and how generous to give something so precious to your brother.

I've never heard of a penny ring before - but that one is precious indeed - to everyone who has had it - I'm sure.

That really is a unique gift!, it is amazing, and I admire you for being able to part with it, I hope your brother enjoys it and keeps it as safe as you have all these years. Lovely story Jo, thanks for telling it.

Jo I can't tell you how pleased I am that you photographed the ring. I was telling Simon about it, when I was showing him your Instagram photos of the party. So now I can show him this very, very precious gift.

that is such a sweet story and im sure your brother was thrilled :)

That is a beautiful ring and I love that it was made from a penny. That is so cool. Such a special gift as well with great meaning to it :-)

I never imagined a penny could be shaped into a ring and still retain so much of its original character. I'm sure your father would be very pleased to know you have passed this treasure onto your brother.

What a wonderful story of a very special ring. The perfect gift for your brother. I've never seen anything like that before. Thank you for sharing it. I'm very late joing in and catching up with all the stories this month!

I really love it! I would wear it if it fitted me. I love quirky things like that with a history and I'm so pleased that it has found the perfect home.