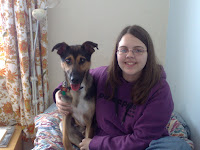 This is my new blog where I plan to bore you to tears with tales of Alfie the wonder dog and Maddie the brat!

This week the dog managed to catch a squirrel over the park. He looked so proud of himself until it started moving, the look of shock on his mouth as he released it and the look of shock on the squirrel's face as it hit the ground was priceless but as usual I didn't have my camera on me.

His ordeal hasn't stopped him chasing them, he's even learning to climb trees and has put a hard hat and hoist on his Christmas list!
Posted by Jo at 22:41