I haven't been around much blogging or blog reading because I've been unwell.  I've come to the conclusion that I'm run down and need a rest, chance would be a fine thing :)

I have been doing some crafting though and I have a couple of layouts from last week to show.  The first one is of my very own little "cake addict" Maddie.  She was just over a year old, we were at my nephew's birthday party and I think she managed to cover herself in more chocolate cake than she actually ate! 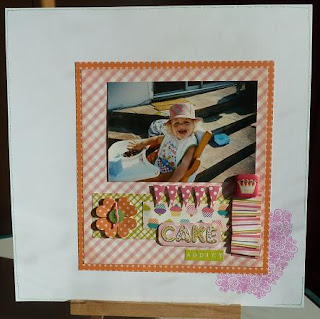 I think these papers go well with the hat she was wearing.  I remember buying the hat at a market in France and she wore it every day until it finally fell to pieces, she was so upset when that happened. 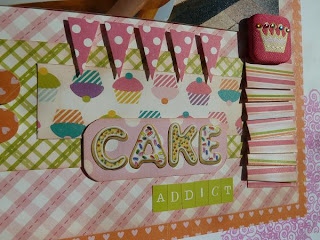 These alpha stickers were the inspiration for the layout, I HAD to use them because I think they're so cute.

The second layout is a picture of Maddie at one of the many picnics we had at the Isabella Plantation in Richmond Park: 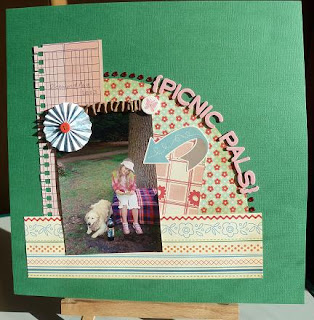 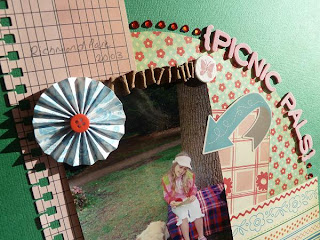 I haven't got that many good picnic photos because most of our picnics brought on a downpour and we normally had to run for cover!

In other news Bertha the boiler has broken and I'm keeping my fingers crossed that it will be fixed soon, at least I don't need the heating at the moment.  I've also planted my veggies and, a week later, the seedlings are starting to show their heads :)

Great crafting. My habits are in reverse. Lots of blogging but no crafting. I guess I find the writing and photography less time consuming.

Sorry to hear you have not been feeling well! Hope you get some rest and feel much better soon! Love the layouts!

I hope you are feeling better soon Jo x

Great pages - that OA is fab!

Hope you are feeling much better soon. Very cute photos and wonderful layouts! Love your colors.

Oh my word Jo, these are just gorgeous.

You've made some great pages with your photos, really lovely memories.