A few years ago I took Maddie for a little tour around London.  Being only 20 minutes away it's something we do often but, on this occasion, rather than just wander round we had a plan.  We were going to look at The Elfin Tree.  The Elfin Tree is over 900 years old, it's a tree stump that originally came from Richmond Park and was decorated with carvings by Ivor Innes.  In 1966 Spike Milligan led a campaign to have it restored and it is not situated in Kensington Gardens and is a Grade II listed structure, well worth a visit: 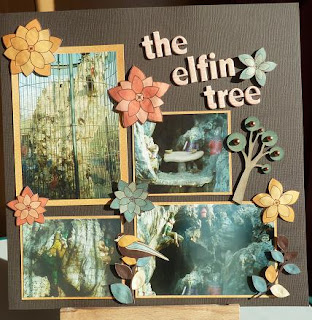 I wanted to include lots of photos so I made the layout quite simple. 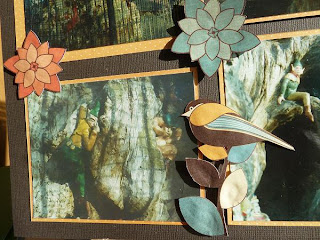 The carvings really are amazing but it's hard to take pictures because it's surrounded by a cage.

I am still feeling a bit poorly but I'm getting plenty of rest at the moment, which I'm finding quite hard because I'm normally always on the go!

That's so lovely Jo - I remember going to see it years ago, in the days before camera phones when I didn't have a camera with me!

I didn't know about this tree, I think I'll have to go and visit it.

Great layout, shows off the photos nicely and love the little bird!! x

Sounds interesting! Love all the flower and tree embellies you used.

Love all the nature touches on the layout, I have never heard of the tree but it sounds very interesting!

We visited Kensington Palace while in London a couple years ago. I loved London! We will return someday and go see that tree! Love the layout! Glad to hear you are feeling better! Rest is definitely a good thing!