To cut a very long story short, I have been having a reflux problem for the past 3 months and today was D-Day!  I had to have a camera put into my stomach to find out what the problem was, nothing was found so back to the drawing board...but....they gave me the photos of my insides!  I never dreamt they would and now everyone is wanting to have a look, don't worry I won't share them on here and they won't ever turn up on a layout, but how amazing :)

I'd taken today off of work for the procedure and, as it was first thing this morning, I've had all afternoon to scrap.  I decided to do Shimelle's sketch this week because I have done one for ages, here's the result: 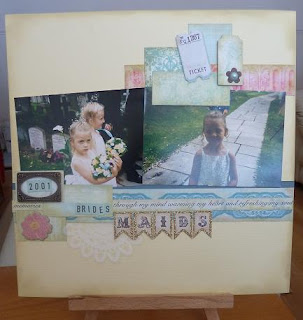 Maddie being a bridesmaid for the third time back in 2001 for my brother.  The flowers were overwatered which made them heavy and her ribbon broke so she had to carry them in her arms, hence the miserable look on her face! 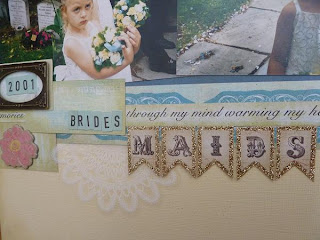 And it gave me the chance to do a bit of stash busting as I used an old Sarah's Cards kit, so old I can't remember which month it is!

I have tomorrow off of work too and I'm looking forward to being a lady of leisure.

I hope they find out what is up with you soon

Lovely layout!! I hope they are able to find out what is causing the reflux!

Oh Jo this is lovely. Please note I'm doing this in reader lol