It's that time again, the first Sunday of the month, and that only means one thing........it's time for Storytelling Sunday!  I'm so pleased that Sian started this and I'm disappointed with myself for letting it run for a year before joining in because I love telling stories.

Today's story is a quicky but one that makes me chuckle.  It all happened  on Christmas Day 2011.  I was taking loads of pictures, snapping away at the family, when both of my sisters ended up in front of the lens.  I had to get a picture of them together and, as is usual in the digital age, they wanted to see the picture almost before the camera had captured the image.  They didn't like the first picture because "look at our chins" they said.  So back to pose and this time with heads thrown back so the chins were gone! 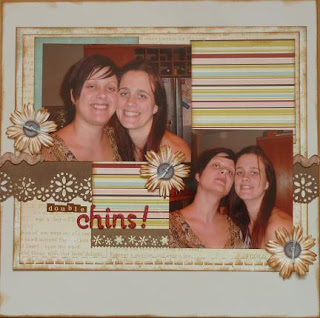 The one on the left is take one, the one on the right is take two.  I quickly snapped a picture on my phone of the unfinished layout and sent it to my sisters.  Jemma, on the right of the shots, insisted I took the layout in to work the next day so that she could see it in the flesh and show it to our work colleagues. She was so insistent that I take it in that I had to stay up and finish it off.  I wonder if she would have been so keen to see it if one of the finishing touches hadn't been the title: 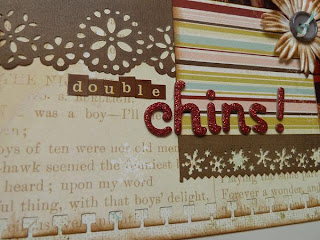 I thought it was a nice surprise for her the following morning when she got to work.

If you haven't already then please tell your story and share the link over at Sian's place.  I'm off now to read everyone else's stories now.

I hope you've had a good weekend.
Thanks for stopping by
Jo x
Posted by Jo at 20:18

lol!! the same happens with me and my sisters. Lovely story and i love how your layout too Jo x

Great layout and story. I don't think your sisters have anything to worry about, I cant see any double chins but if they're anything like me we're often our own worst critics!

Like Clare, I don't see any evidence of double chins.....you should have seen mine before I lost weight last year!!
Alison xx

You sure joined in with a great story, and a lovely layout :)

Cool story and LO!
Thanks for sharing.
Cheers from France

Perfect title what was the reaction lol

Love your story Jo!! I agree with the others, no evidence of doubles :) Great layout!

there really are no double chins so your sisters need not worry!

Chins? What chins? We do the same here though!

Hi Jo - it's great to see you Storytelling this month with a lovely moment to remember. Do you get told all the time how alike you and your sisters are? I can definitely see a lovely family resemblance! Great story. I love it.

i wish I had their double chins! Great story and layout.

I'm always worried about my double chin in photos too!!

Love the lay-out and the story behind it. What gorgeous sisters, wouldn't notice their chins even if they had any to speak of. Such happy photographs.

great layout and love the story too, lol

Love the border punches! I hate double chins too!

That's a funny story with a cheeky twist at the end.

Yes, the scrapper gets the final word, doesn't she!

I understand the chin concern - I think most people do!

Great story. Brought a smile to my face. My favourite part though of my visit to your blog as to be the background! I LOVE CHERRIES!!!!!!! Too Cool!