I have been so busy and on the go all day so I thought it was about time I had a little tea break!

I'm joining in with Shimelle's Blogging for Scrapbookers but, as usual, I am behind.  I'm not letting this get me down though and I'm still basking in the glory of already using tabs and having ventured into the land of Google Reader! Ok so it was a quick venture and must have been long ago because I total forgot I'd ever sorted out my settings but, nonetheless, it was something that I knew about which is a great achievement for someone like me who's had an iPhone for over a year but still hasn't worked out how to put songs on it!

Anyhoo, that is how far I've got but I will catch up and even if I don't, due to this class, I have found hundreds of great blogs to read with great stories, people and ideas!

I've got a couple of layouts to share from this months Gotta Craft kit, I've done 4 layouts so far but I don't want to overload so here's a couple: 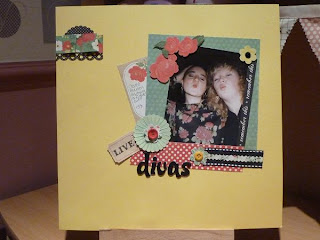 I love this picture of my friends, Clare and Allison.  It was taken 20 years ago but I can still remember where we were, what we were doing, the songs that were playing and the laughs that we had. The Echo Park - For The Record papers were a perfect match to Clare's top which just goes to prove that all things do come back into fashion after a couple of decades! 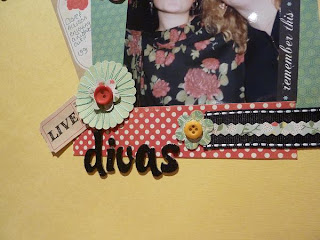 We They were such divas back then which is good because you don't use too many Thickers on a title that short and you get rid of the pesky V.  I made the little scalloped embellishment after seeing something in a shop and thinking "I can do that". 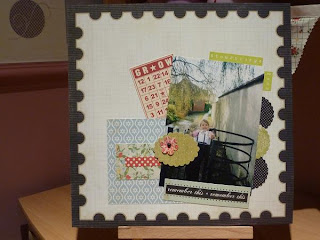 I love this picture of Maddie, taken when we were on a Halloween weekend away in Stourbridge.  Back then she still loved having her picture taken and wasn't prone to living in pyjamas! 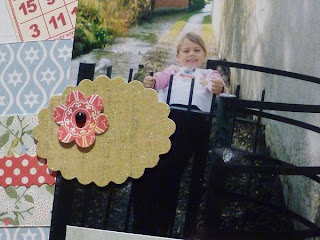 It's a picture I've wanted to scrap for a while but there was one thing stopping me.  Under the embellishment on the photo is a big sign reading "please do not let your dog foul the footpath".  Who wants that on a layout?  It's a sure sign that not much thought was given by the council concerned to the possibility that someone would want to scrapbook a photo of their child on the swing gate!
My tea break is over and I'm sure there are a few more chores to squeeze in before bedtime.
I hope you've all had a drop of sunshine to enjoy today!
Jo x
Posted by Jo at 22:33

Ok why aren't these in my inbox for the site and shop blog????? :) Really great layouts Jo, glad you managed to hide the sign so well

Me too! I can't put songs on my iphone either.

I'm with Sandra - lets put them on the shop blog!

Great Pages Jo, and very clever how you've covered the sign up ... I'm playing along with Blogging For Scrapbookers too and loving all the new blogs I've found!

Another blog I'll be revisiting! Clever cover up, and councils are just so rude not thinking about making their gates photogenic!

What stunning LO's! SO glad you posted and aren't discouraged. Can't wait to read more!