Waves on the Shore

Good evening and welcome to everyone who's found me via Blogging For Scrapbookers.  I'm Jo, one of 7 J's. Two brothers, two sisters and both parents all have names beginning with J.  I think my mum did it so she could open all of the post and just innocently proclaim that she thought it was for her!

I love the sea and being near the sea but live somewhere totally landlocked, we can all dream and my dream is to one day live near the sea.  Especially I love the movement of the sea and the waves and the way this week has gone made me think of just that very thing.

My week has raced by, it's felt like giant waves crashing all around me and I've been caught up in the current.  It's been a nice week though and I just went with the flow and let those big ole rolling waves crash around me, I relaxed into them, didn't stress and arrived at the weekend.  Now that the weekend is here I would like my waves to be much more gentle, I would like them to feel like they don't have the energy to make their way up the beach but when they eventually do they want to hang around for a second, feeling the sun on them before slowly slipping back into the wash.............in other words I don't want my weekend to go as quickly as my week :)

I also love sunsets and yesterday when I got home from work I was treated to this: 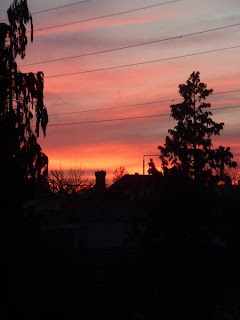 Granted it's not a sunset over the sea but I thought it was beautiful. 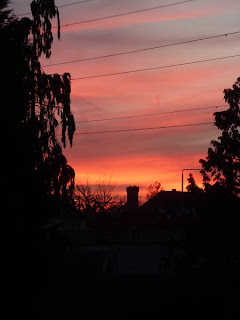 Today I was far too busy too look at the sunset because I had some fantastic news. Paul, my partner who live 107 miles away from me (BY THE SEA!!!) is coming to see me for the day tomorrow.  I wasn't expecting to see him for another 3 weeks so I was over the moon and happy to do a full day in the office and then come home and scrub the whole place to within an inch of it's life!

Other plans this weekend are to catch up on everyone's blogs, follow new ones, make lots of comments, scrap - yes I have waited until very nearly the end of March before deciding I would like to do a Document 2011 album! and cut the grass.

Keeping with the theme of beaches, I'll leave you with this layout of Maddie building castles in the sand: 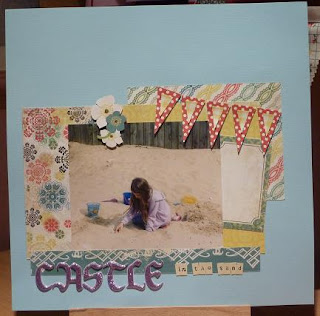 Another layout I managed from the Gotta Craft monthly kit. 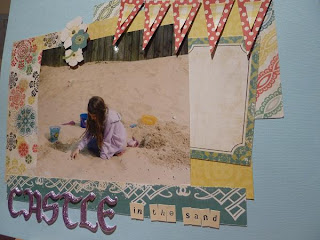 We rented a house on Sandbanks of all places (no I didn't see any rich footballers or Harry Rednap) but this was our garden, our own private bit of beach!

Stunning Sunset!! As you know I live near the sea and beaches and I know I'm very, very lucky as I too love the sea and can spend many hours in a beachside cafe watching the waves!! Have a fab weekend with Paul! x

Hi Jo. Hope you have a lovely weekend.
Lorraine BFS

I have 9 siblings. Our parents started off naming their children with names starting with "W" (very 50s-ish) for the first initial of my dad's name. That only lasted for the first three of us kids--and I'm thinking #s 4-10 are eternally grateful since there are only so many nice names that start with W! As an aside, kid #6, a brother, was named after the lead character in the book our dad was reading at the time!

gorgeous sunset photos Jo :)
I too would love to live nearer the sea. Barmouth in Wales is our nearest beach & that takes a good 2 hours to get there!
Have a fab day with your man & enjoy the rest of the weekend - you (& me) deserve it!! xx

Lovely colours in your sunset photos. Enjoy your weekend!

Enjoy your weekend Jo with Paul .. gorgeous photo of the sunset, and such a lovely layout too.

I didn't know about the "J"'s in your family .. how lovely getting to know more about you.

Hi Jo! Hope you're enjoying BFS. Love the photos of the sunset, gorgeous!