I am starting to hate Tuesday, and that doesn't include the fact that I spent all day thinking it was Wednesday! Last Tuesday I had lots of plans to craft, thought all my time was my own once work was over and then Alfie goes and catches a bird in the garden.  He seems to have multiple personalities that include: being a dolphin and liking his tongue tickled, being a baby and liking lots of cuddles, being a hunter and catching a squirrel and now he's added a cat to his repertoire by catching a bird.

Anyhoo that was last week and this is tonight's problem: When I got my new job I phoned to change the direct debit on my house insurance, they couldn't do the day I wanted but we got it sorted in the end.  The month passed and they took the money out on the wrong day when the account was empty.  Got them to give the money back and then paid it to them a few days later.  The following month it comes out on the wrong date again so I'm stuck on the phone for ages and then they assure me it won't happen again.  They were right, this month the money didn't come out at all! I called them and it's because they've cancelled the policy due to non-payment even though they've confirmed I have paid.  I shall have answers in 48 hours but in the meantime I've had to take out a new policy!

On to nicer things. Here's a layout I did of Maddie and my niece.  Just looking at the picture makes me laugh because it's captured the proper belly giggles they were having: 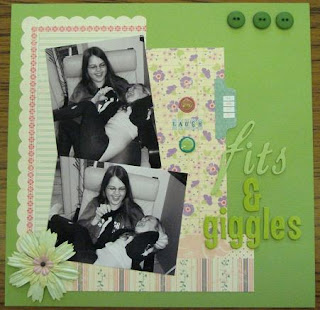 I used a crop kit from Gotta Craft 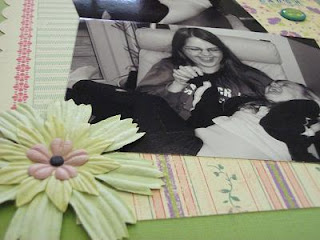 Just look at them laughing
And the brads were perfect
Yesterday I got some bargain inner cushions for only 97p each so I'm hoping to start making the covers at the weekend.  I have also finished one sock and started the next, just haven't had time to take a photo yet.  Also thought I'd tell you what a cheek my brother's got, he came to bingo last night, sat in MY seat and won £46!
Posted by Jo at 20:27

For goodness sakes, doesn't he know that it's YOUR seat, and YOUR seat alone :) I'm thinking you may need to make a reserved sign for it LOL. I love this layout of yours Jo, it has the same effect on me, makes me really smile.