I had two nights without the internet and I really missed it, thankfully it's fixed now.  Having to hang on the phone to Virgin to find out what the problem was made me lose my mind, well that's what I'm blaming it on!  I went to a crop last night and forgot to take any photos with me, the basic and most important element was left at home so I had no other option than to sit there chatting!

I do have a couple of layouts to show though.  Me, Maddie and our friends Sarah and Emily spent a day in London absolutely yonks ago, I'd forgotten all about it until I found the pictures when I had a sort out of my craft cupboard. 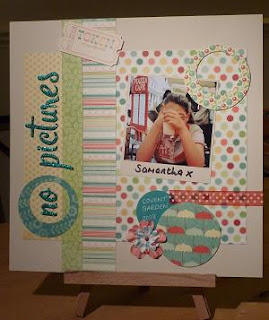 This is typical Maddie when I have the camera out!  The papers used were from an old Gottacraft kit, I really need to cut into all of my kits and I've been doing well this year.....so far. 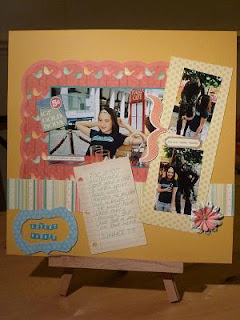 Emily is more than happy to strike a pose.  Again I used the Gottacraft kit and although it's not a double layout I think they'll look good together in the album. 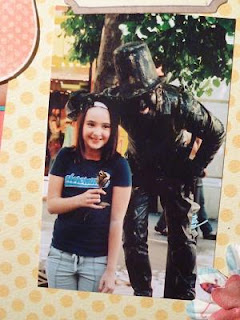 There was a street performer in Covent Garden offering passers by a rose.  If they took the rose and posed for a picture he would pull a large, fake knife out and pretend to stab them.  He pulled the funniest faces and had the longest tongue and the person posing for the photo didn't have a clue he was doing it.  He must have like Em because she just got a pat on the head.
This week has gone surprisingly quickly which is fantastic, it helped having this afternoon off of work to go craft shopping and have cream tea.  Now it's time to soak in the bath and then chill in front of the TV.
Happy weekend
Jo xx
Posted by Jo at 20:19

oohh lovely layouts Jo :) ... I for one was glad you'd forgotten your photos yesterday, so much fun sitting with you catching up with all your chatter.

sounds like the perfect day ... craft shopping and cake .. yum.