A few weeks before Christmas there was a cybercrop over at UKScrappers.  One of the challenges was a mystery kit that, once received, you had to turn into something gorgeous.  I normally do a layout but this time I thought I'd do something different and asked my crop friends for help.  I decided to make a Christmas Wreath and cover it in snowflakes.  The girls at the crop brought along loads of Cricut carts, punches and Slice cards with lots of snowflake designs on them.  I spent hours cutting the shapes and then assembled the following: 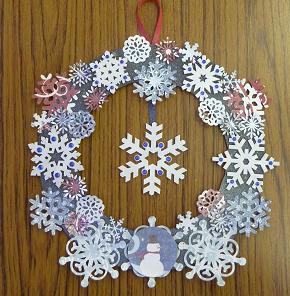 I was so pleased with it, put it somewhere safe until Christmas and then found it when I was getting ready to take the decorations down......hopefully next year I'll remember to hand it somewhere so everyone can see it!

I've been doing well with book reading and have just finished my first book of the year.  It was about the little ships that went to Dunkirk during WW2.  Now I have seen a ship that went there, known it for years and have always said to people "that little boat went to Dunkirk" It wasn't until I read Lilian Harry's Three Little Ships that I realised just what that meant.........for the little boat and the crew.  The little ships celebrated the 70th anniversary of Dunkirk last May and all of those that could still sail returned to the French harbour.  I wish I had known and I will I could have seen it.  I know intend to try and see as many of the little ships that I can because they were so brave.

I was back at work today and it was a shock to the system, I'd forgotten that there were two 7 o'clock's in the day!  Feeling very sleep now and I really think I should have an early night, I might try and get a few rows of knitting in first though.

It's very pretty! Pity you didn't actually get to use it though. First day back at work is always a pain!

Oh Jo, it's just GORGEOUS ... you can really see how much work you put into it.