Too Busy to Blog!

I have just been so busy I've hardly had time to do anything!, It's not all bad though and here's a quick rundown:

Thursday I went to my nephew, Egg's, birthday party: 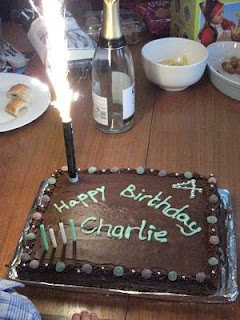 I went to a craft fair on Saturday morning ~ I think they used the term craft very loosely because it was 90% jewellery stalls so a bit of a disappointment.
After that I went to a Summer Fair at my niece's infant school which also used to be my infant school.  It was funny walking through the gates 30 years after I'd last been there and the playground certainly looked like it had shrunk.
In the afternoon I went to a wool shop.  I told the woman that I wanted to knit something but didn't know what. "Socks" she said "it has to be socks" so that's what I did and here's how I'm getting on: 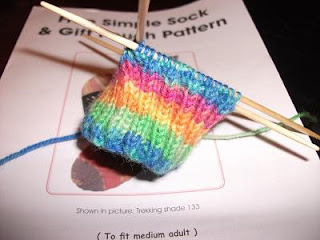 Sunday I went to a boot sale and grabbed myself a bargain, I got Maddie a much needed bookshelf for her bedroom for a mere £3.  I spent the afternoon in the garden reading, knitting and getting burnt!
Monday the most bizarre thing happened.  I was standing in the High Street talking to a market researcher when a woman pushed a pram into me.  She apologised and said she been pushing the pram with her head down and not looking where she was going.  I said that was stupid because she could have pushed the baby into a car or something equally dangerous.  She proceeded to tell me I was discriminating against her and that I had started it!!! I was the one standing there minding my own business and if she'd have pushed it into someone less sturdy than me they could have fallen in the pram!  However, Monday did get better when I won £770 at bingo.
I did a layout of Maddie on her last day of primary school, Friday is her last day of high school and I can't believe how the time has flown by. 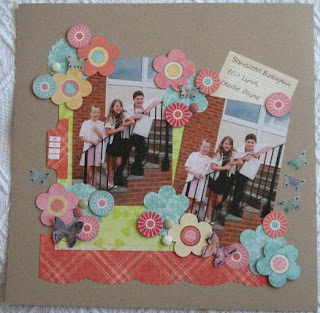 Lots of flowers as usual 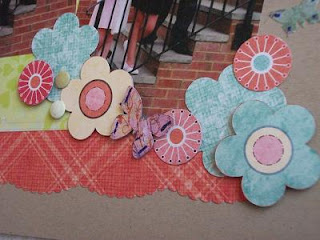 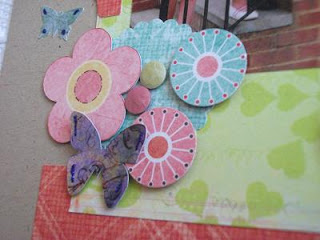 The rest of the time it's just been work, work, work but we have all decided to join together and encourage each other to lose weight.  So there it is, I've gone public, I am on a diet.  So far it's been ok, feeling a bit hungry now and then but my energy levels are so high.  I shall do an update to let  you know how I'm getting on, I have a wedding to go to in September and my goal is to lose 2 stone by then.
Hope everyone's enjoying the sun x
Posted by Jo at 19:13 No comments:

Posted using BlogPress from my iPhone

I had such a great weekend.  It was nice to finish work on Friday but I just got all my boring jobs done in the evening, washing, hoovering, ironing, dusting................swear words to most people but I like to get them out of the way quickly.

I went to a crop on Saturday and managed to get 2 layouts done and spend loads of money on beautiful papers.  In the afternoon I drove down to Paul's to surprise him and boy was he surprised.  We had a great night in the pub in the company of Jack, Jack Daniels that is, and it was just lovely to spend the time together.  The only downside was that Alfie broke a claw as soon as we got there and covered everywhere in blood, he's lying on his new blanket now feeling sorry for himself.

Here's a layout of my great niece that I did ages ago but haven't got round to posting: 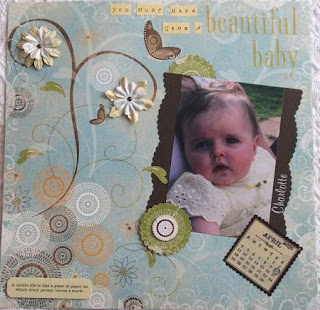 I normally think that babies sort of look the same and I'm not saying this just because she's family but she is so so beautiful. 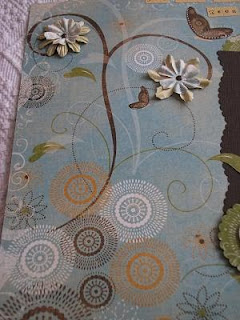 The paper was perfect and I just had to add a few flowers. 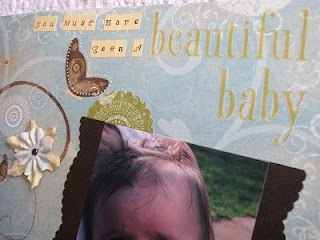 So I made this:

along with the thousands of other jobs I've completed at work today. X


Posted using BlogPress from my iPhone

I can't believe it's May and it's so cold.  I'm sitting here freezing yet at 05:30 the sun was out and it was lovely and warm!

I did my training course on Saturday and passed the test with a 100% result.  I didn't like the idea of giving up a Saturday but I did enjoy the course and learnt quite a bit.

Sunday was cold and dreary again so me and Maddie cancelled our planned visit to London and had a lazy day.  We're going to London for definite when they put a ship in a bottle on the forth plinth in Trafalgar Square.  Maddie is absolutely nuts about ships in bottles, although I did buy her a kit for Christmas once and she still hasn't done it!

Bingo last night saw a little win, £10 in fact but at least it meant I had a free night.  I also won £10 on the lottery on Saturday so I'm hoping that, as things come in threes, I'll be winning the double rollover on the lottery tomorrow night........I won't hold my breath.

Here's a layout I did of Maddie at a crop recently: 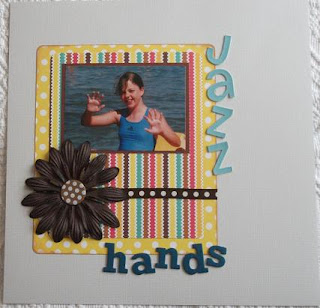 We always take the mickey out of my mum because when she dances she loves to use her jazz hands. 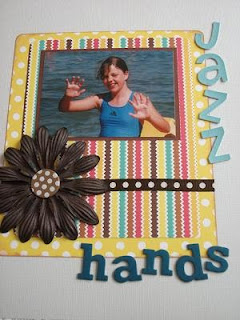 Whenever I go out with her and there's music playing the kids always ask me "Did Nanny do her jazz hands dancing?" 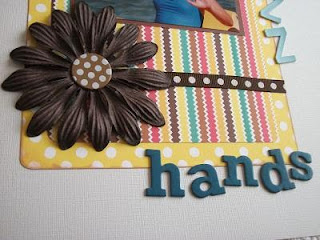 I really love the bright colours in this kit.  I've still got some left so I might get them out and see if they entice the sun to put in an appearance! x
Posted by Jo at 18:47 1 comment:

I am so pleased it's Friday but not a short week for me because I have to work tomorrow which is a shame.  I had wanted to sort my stash out last night and fill my lovely new drawers but I don't know where the time went and I didn't get anything done in the end.  Maybe I'll get some done tonight in between the washing mountain I'm trying to get through!

Thought I would share a couple of layouts I did with the Gotta Craft kit.  They've sold out now because, with those kits, you snooze you lose! 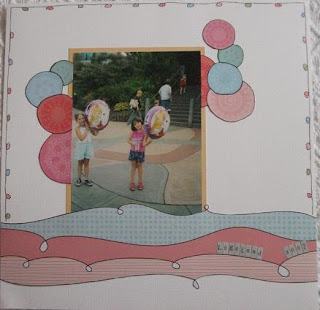 I love the way the papers almost match the pavement and they were very handy for covering up a drain at the bottom of the picture! 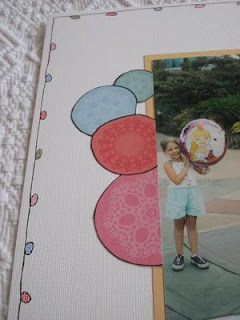 How cool that the papers look good with the balloons. 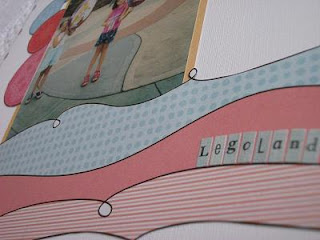 I'm racing through some of my old pictures and this was from a summer when Maddie always looked happy, always wore bright colours and girlie clothes.  Just before her wardrobe turned into a range of hoodies and jeans: 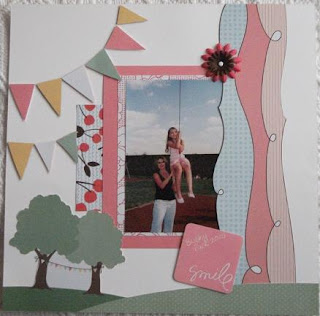 I love the bright colours and bunting is always good 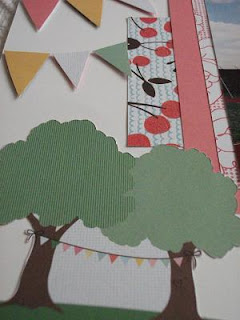 Must dash and do dinner before my stomach thinks my throat's been cut! x
Posted by Jo at 19:40 2 comments:

What do you think of these little beauties? I just couldn't resist them:

I can't wait to sort my stash and start filling them up!

Posted using BlogPress from my iPhone
Posted by Jo at 19:31 2 comments:

I live near a church and every Tuesday they have bell ringing practise.  Last night I turned the TV off, got in the bath and relaxed while listening to the bells....it was bliss.  It got me to thinking about how I would like to give it a go, I'm sure I have the strength to hoist a big ole bell attached to a rope.  It's not often in a town that you hear real bells pealing out, some places have mechanical bells, so maybe I should hurry and investigate about joining a group before all of the bell ringers disappear.

I just had to show you this layout and I am so pleased that the person I made it for gave me permission to show it off.  I did it for a work colleague who wasn't really sure about scrapping so, rather than try to explain it, I asked for a picture of her son and this is what I made: 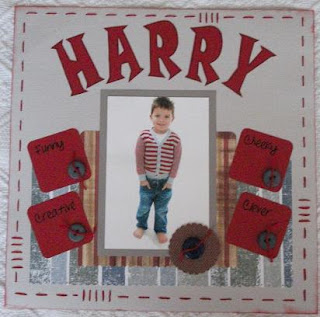 It was inspired by The Strand class done for the UKScrappers cybercrop. 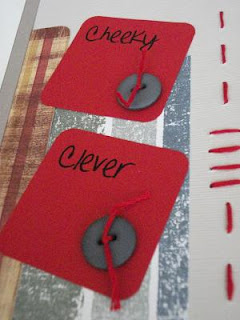 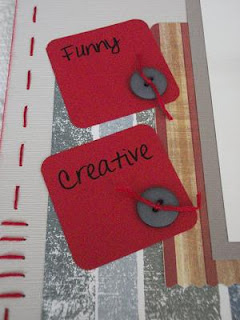 Because I'm so nosy it was easy to pick up snippets of what Harry is like and I can't say how much I enjoyed doing it.  It's the first layout I've done that hasn't ended up in one of my albums but I do know that it went straight into a box frame and up on a wall.
The other thing I would like to try is line dancing......off to investigate! x
Posted by Jo at 19:54 2 comments:

And the 4th of May at that! Time sure is flying, I can't believe I haven't blogged for a week.  I have been busy with work but I did have a crop as well so it wasn't all bad.  I did have to waste money on another tyre, that's three in two weeks now but safety first!

To make myself feel better I went on a little spree to The Craft Barn, plenty of craft shopping with my friend Clare and then finished off with a cream tea.....bliss.

I went down to the coast to see Paul on Saturday night and we had a lovely time just the two of us.  We sat outside the pub commenting on the amount of young women that totter about on ridiculously high heels.  I wonder if they know that they look like they're trying to hold a walnut in between their cheeks as they try to walk along.  It made me feel that we'll never see couples rowing in the street with the man walking away and the woman chasing after them because, in the heels they're wearing, if the men let go the women can't move a step!  I know I sound old but just watching them try to waddle makes my feet ache!

Here's one of the layouts I did from the UKScrappers recent cyborcrop.  As soon as I saw the class I knew it would be perfect for this picture of Maddie painting a bench when she was younger.  Getting an action shot of her is very rare and, now that she's a teenager, I'm lucky that she can just about be bothered to breathe for herself! lol 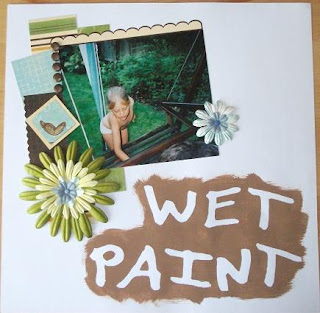 I didn't want to waste any of my lovely alphabet stickers by painting over them, peeling them off and throwing them away....I don't even like using them on layouts, I just like to look at them!  So to make things harder for myself, I printed the letters out onto cheap old paper, hand cut them and then stuck them down with repositionable glue. 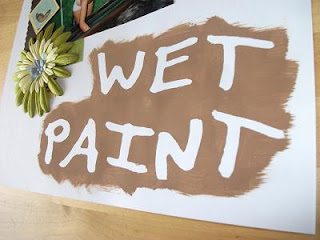 The effect is still the same. 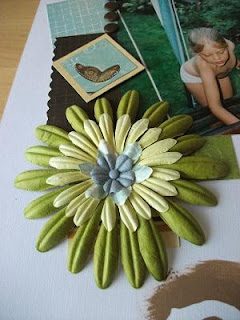 And of course I had to have a flower on it.
After a miserable weekend the sun has been shining today but it is freezing, my dad always said I should live in a hot house and I think he was right.
Posted by Jo at 19:02 1 comment: