Let me introduce you to John Thomas Harris, known to my mum as H and his friends as Harris, my handsome dad: 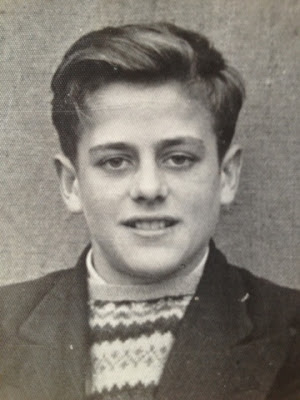 He was a quiet man who loved his family more than anything.  His work was physical, he was a scaffolder who then went on to build film sets, he was very creative and artistic.  He had an incredible sense of humour.  He once had to give a speech at a function for his boss, he was so nervous but got through it by using his humour, the comedian Jimmy Jones got on stage after my dad and said "How the hell do I follow that!". 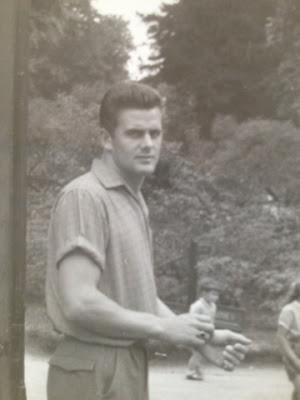 My dad was intelligent and had a very quick mind.  I wouldn't go in the sea once because I'd heard a report of giant jellyfish in the water.  Without missing a beat my dad said "No, what you saw was an advert for Rowntrees that said nobody's jellies are bigger than our jellies" I believed him and went swimming, he'd reassured me. He would get excited about things, Christmas and a surprise for someone in the family would always get him excited, I get that from him. 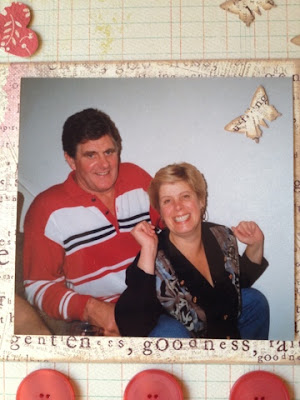 He loved to do a BBQ and was an amazing cook.  There was the time in France when we didn't have a BBQ so he "borrowed" one from the chief of police for France, in the end he made one from an old shopping trolley but that's another story for another time. He made the most amazing pastry and his apple pies were always special. When he cooked he liked to prepare and have all of the ingredients chopped and grated and in their own little bowls :) 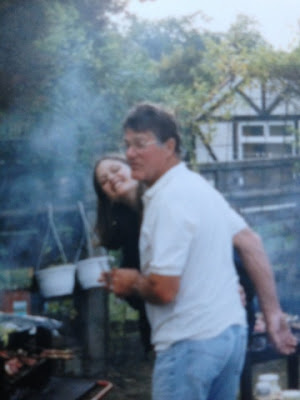 Dad was very sporting, he played football for the county when he was younger, Monday night was always squash night and he loved to swim.  I recall my dad going for long sea swims when we were on holiday, I also remember with pride how over the years he saved the lives of 7 people who were in trouble at sea, one of them a lifeguard!

Then Alzheimer's struck, my dad was 57, just 57 years old!  I remember many times during his illness that I wished someone could save him. As a family, united, we went on a 12 year journey with this terrible disease. 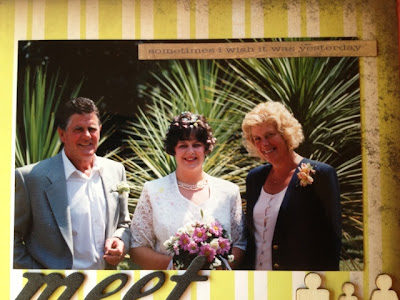 At the start of his illness Maddie had the best of grandads.  Maddie isn't the name on her birth certificate, it's the name he gave her.  From the moment she was born he always called her his little madam and in time it evolved to Maddie and it stuck. 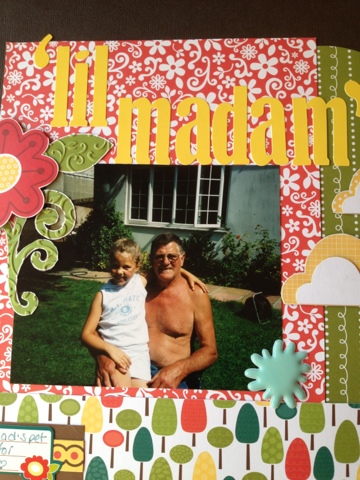 He was always there for her, ready to play any silly game that she made up and it was great to see them playing, wonderful that he had the time to play with her.  But that was selfish because the only reason he had the time was because his brain cells were dying.  His other grandchildren weren't so lucky, some of them never knew him but he lives on in our hearts like the legend he was and all of his grandchildren hear the stories of grandad John. 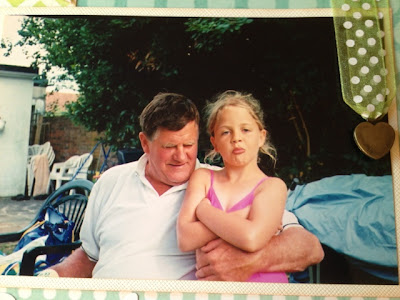 It all started off with coffee, there were a couple of times early in the morning when he poured boiling water in to the coffee jar instead of his cup.  At the time it was annoying and we thought he was just tired but then other changes came along, subtle changes, and the doctors diagnosed Alzheimer's. 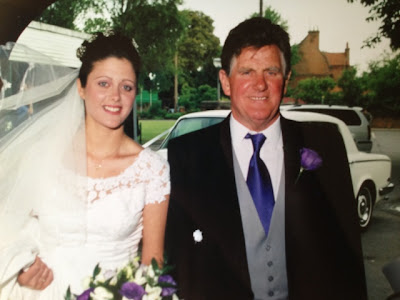 Unlike cancer, when you are told you have Alzheimer's there are no options, there is no hope.  They can give you drugs that will slow it down but they only turn you into a zombie with very little normal function. My mum soon stopped giving him the drugs that took away any quality of life. 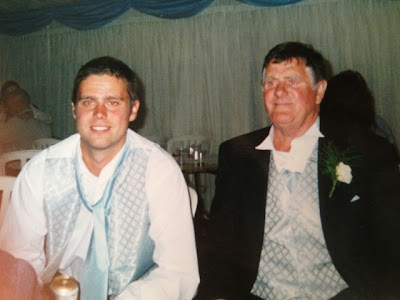 Alzheimer's has stages, it is like watching someones life in reverse.  My dad had been in Germany for his National Service and spoke the language fluently.  I remember the day my mum called me to let me know that, after not saying a word for 6 months, my dad was talking again, the only trouble was he was talking German! 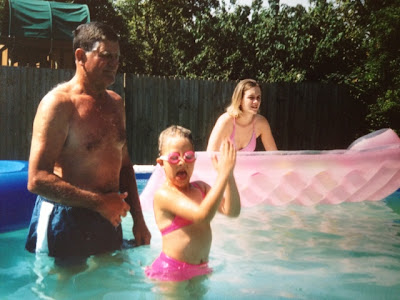 Alzheimer's sufferers go through a stage were they can walk for miles and miles.  Police have suggested that sufferers are fitted with GPS.  This caused a bit of uproar amongst the do gooders but until you get the heart stopping call that says "Dad's manged to get out of the front door and I can't find him" then you don't realise what a fantastic idea this is. It is like a toddler getting out of the house with no sense of direction and no idea of the dangers of crossing a road.

Alzheimer's made the whole family even closer, we were all there to help my mum so that my dad didn't have to go in a home. It also isolated us and we would grieve and shed our tears in private. We also learnt a lot of lessons.

Close friends turn their backs and disappear from your lives, people who had been friends with my dad for over 40 years just stopped coming to see him.

We learnt how strong my mum is, how much fight she has in her, how much she loved my dad. 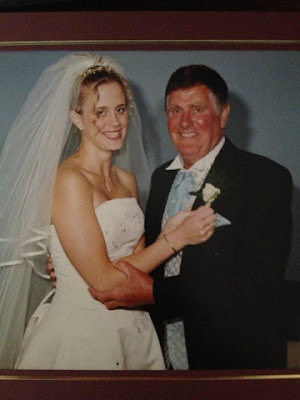 Dad saw all but one of us married, walked his 3 daughters down the aisle and stood at the side of one of his sons.  Twelve years after we were introduced to Alzheimer's and five short years after this beautiful photo was taken of my dad looking so proud and happy at Jemma's wedding this photo was taken: 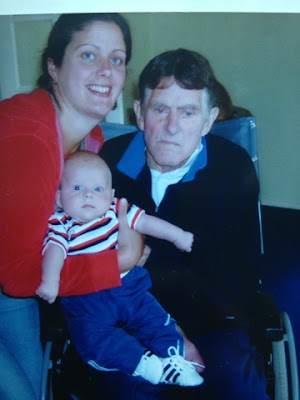 I still see reminders of my dad all the time and they always make me think of him and smile.  I know that he is always with me.  I see him in my brothers and in my nephews but I wish he was here to see it too.  His many grandchildren would amaze him and he would cherish them all. 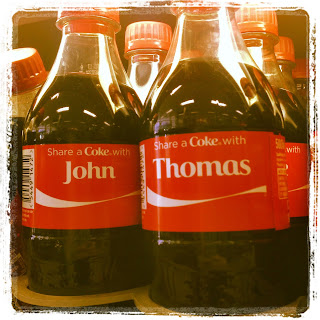 On the 22nd of September me, my brothers and my sisters are doing a 10K Memory Walk to raise money for Alzheimer's.  We want to raise money so that, in the future, if someone is diagnosed with Alzheimer's they are offered a cure, a chance to live their life out in full, so that they can be offered hope. 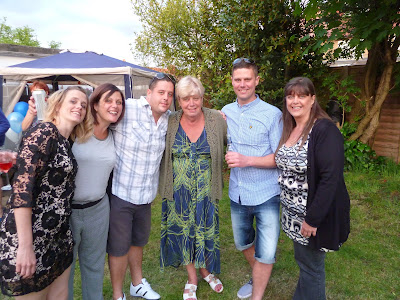 I would walk this 10K bare foot over hot coals if it meant that my dad would be at the finish line and I could see him healthy and well but I know that won't happen so I'll wear my shoes and socks and do it in the hope a cure can be found.

Now I know dad told me not to beg but, just this once, please, if you can, visit my Just Giving page and make a donation.  It doesn't matter how big or small, whatever is raised will help another family that is suffering because of this terrible disease.

Today would have been my dad's birthday, it's the fifth one he's not been with us but he is not for one second forgotten. If you feel like giving a posthumous birthday present then maybe you would be kind enough to share this blog post with your lovely followers.

I will keep you updated on my fundraising and would like to thank you from the bottom of my heart for reading this post.

I can't believe another month has passed and it's time for Story Telling Sunday over at From High in the Sky. Every month Sian encourages us to tell a story about something precious to us.

Although my precious items are very old they are new to me, I inherited them only yesterday!  The two items I'm sharing today hold wonderful memories for me and take me right back to my childhood.

My mum and aunt have the unfortunate task of emptying my grandparents' home after the recent death of my grandad and my mum had asked if there was anything I wanted, of course there were things I wanted, things I knew nobody else would want.

As you entered my mum's parent's house the first thing you would see was this: 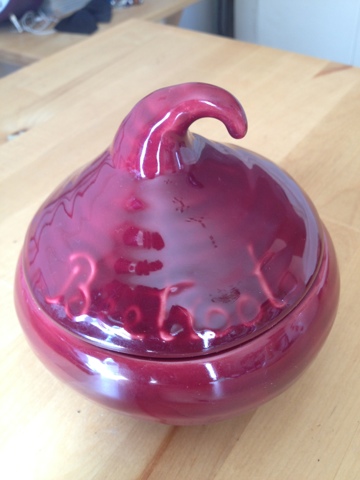 The beetroot jar.  It sat just inside the kitchen door and I have always loved it.  I don't ever remember it having any beetroot in it though.  I knew it was something I would love to have in my home.

The second thing I would see as I moved further in to the kitchen was on the windowsill just above the sink: 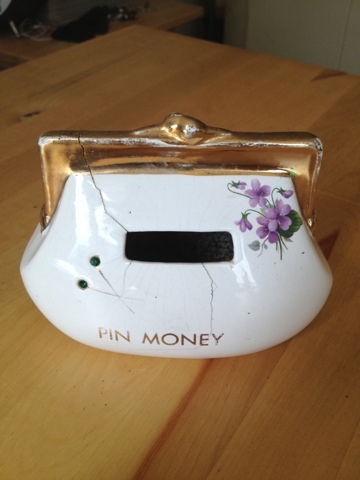 My mum and her sister bought this for my nan for Mother's Day many years ago.  It reminds me so much of my nan.  My mum couldn't understand why I wanted it as there is a big crack in it, I wanted it because it made me think of my nan and if she had this cracked old moneybox on display until the day she died then it was obviously something very precious to her. 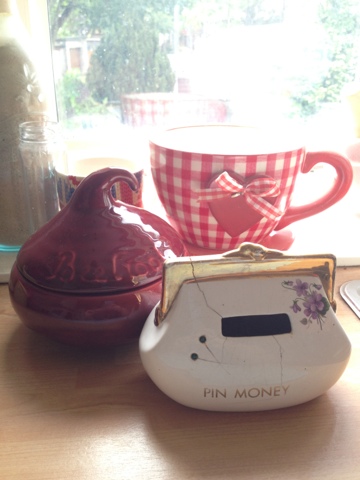 So now I have these two lovely treasures full of memories in my home, do I care that the don't fit in with the other bits and pieces I have? Of course not because I want them to stand out like the precious things they are.

I hope that you will head over to Sian's now to tell your story and read the other stories being told there.