Good morning and happy Sunday to you!  It's the first Sunday of the month and that means only one thing, it's time for Storytelling Sunday with Sian.

Up until an hour ago I didn't have a story for today and thought I wouldn't be able to join in, which made me a little bit sad.  I decided to have a sort out of some layouts that I'd recently done and there it was, in the pile, my story for today! 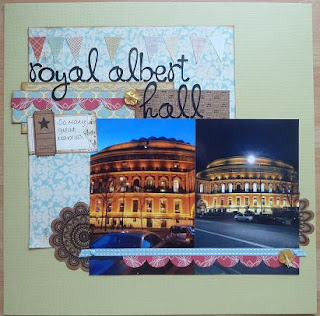 Today's story is one of the funniest I have from the RAH.  Cliff Richard was doing a concert there and my company had bought every single ticket.  I was helping coordinate the arrival and departure of over five thousand passengers, on coaches!  My mum loves Cliff so I bought her a couple of tickets for her birthday so I was coordinating over five thousand passengers and Mum.

Everyone was there on time, in on time and at their seats ready to watch the show.  At the end of the evening everyone was out promptly, on their coaches promptly and back to their hotels for a good night's sleep.  There was only one problem that night, as I was on my way home at about 1am I got a call from a Tour Manager to say that one of her passengers had left the RAH with the wrong jacket.  I told them there was nothing I could do about it at the time and she would have to contact the office on the Monday morning to see if anyone had called in to say they also had the wrong coat, the passenger was happy to do that and I was happy that I'd only had one minor problem.

The next morning I went to see my mum to make sure she had enjoyed the concert.  I was sitting in her living room with a cup of coffee when something caught my eye.  "Mum" I asked "where did you get that jacket?"  "Oh" she says "someone took my jacket by mistake last night"

What are the odds of that? The only issue I had involved my mum, out of all those people!  Did the jackets ever get returned to the rightful owners?  No, my mum's jacket was quite expensive and the one she had come home with was not so we never heard from the passenger with the wrong jacket again.

Now it's your turn to head over to Sian's and tell your story.

Thanks for dropping by
Jo xx
Posted by Jo at 10:16

Gorgeous LO and fab photos of the Royal Albert Hall. Love the story!

Great story, what a co-incidence!

What are the chances of that happening eh...great layout and great story Jo x

Wow, what are the odds of that, indeed? What a great story - I just love the thought of five thousand mad Cliff Richard fans plus your Mum. It has really put a smile on my face, so I'm so glad you were sorting out layouts and happened upon this one

What are the chances indeed? I've never been to the RAH..I would like to get there one day!
Alison xx

What are the chances?!! Great story :o)

Love coincidences…
Have a nice Sunday,
Cheers from France

Great story upon story. The RAH is a great place to visit. Thanks for sharing.

What a great story and what a coincidence! Lovely layout - thanks for sharing them both :)

LOL! Great story and a wonderful layout to go with it.

What a fabulous layout Jo, and how funny that we were only hearing this story the other day at the crop :) I still find it amazing and funny how it turned out to be your mums jacket lol

great layout, you've got some great shots of the ah. What a funny coincidence that it was your mum with the wrong coat out of all those people, and how annoying she didn't get her own coat back!

You have told this story so well. Coincidences are incredible but yours is amazing. I can picture both of your faces that day. Thank you for sharing.

How annoying for your mum! Sounds like it was a great night, well done for helping to get all those people organised, it sounds a bit daunting to me! x

glad it all went well - sounds like a ton of work! shame on whoever took your mom's jacket and then didn't fess up!

Organising that many people would have had lots of problems. Funny that it would be your mum who was the second jacket owner :-)

Love the story - no mean feat to organise all those people!

It's it funny how life hands us these types of coincidences. Glad it was only her jacket that was lost - I feared for a minute that she had missed her ride home.

Love the LO Jo and what a strange coincidence :)

So enjoyed your story - boy what a coincidence that it was your Mum who lost her jacket. Sorry she never got it back.

Wow, that must have been tough to coordinate! Glad you only had one coat problem but what a shame your mum never got hers back.