It's the first Sunday of the month so that means only one thing, it's time for Storytelling Sunday over at Sian's.

This month the storytelling has arrived at the same time I was about to start scrapping some pictures taken at a Halloween event in 2002.

My friend Lynne had stumbled upon a village with a great little pub that was having a Halloween party.  She said it all looked so fantastic that she'd booked us rooms at the local hotel so that we could join in the fun.  This was long before Halloween had really got big in this country so it was a bit unusual but, as it was one of our favourite nights of the year, we were certainly up for it.

On the weekend in question we packed our bags and Maddie's witches costume and headed off to Stockbridge in Hampshire.  The pub was called The White Hart and the efforts the landlord had gone to were amazing. The whole place was decorated with ghosts and goblins, skeletons and witches, giant spiders and cobwebs.  Games were laid on for everyone to join in and my layout shows one of those games: 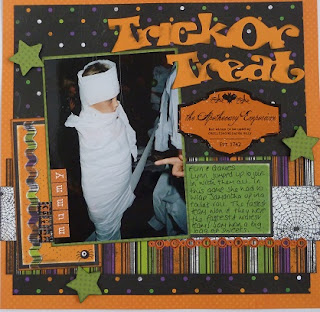 The game was to turn your partner into a mummy with the aid of a toilet roll.  Maddie stood still while Lynne did all the hard work of wrapping her.  The winners were the first ones to be totally mummified, they were plenty of laughs being had by everyone and in the end Maddie and Lynne won first prize! 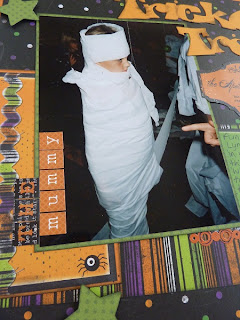 Maddie also went on to win the fancy dress competition and some other games so we returned to the hotel weighed down with her prizes! I think the landlord of The White Hart had made sure that all of the children there won lots of prizes :)

It was such a lovely place, so welcoming and so much laid on for us but the funny thing is I've never been back there since.

Even though Maddie is 18 now we still enjoy Halloween very much and have made it a tradition to watch Hocus Pocus every year on the 31st October.

Head over to Sian's now to tell your story and to read the stories of everyone over there who get together on this day to tell a tale or two.

Oh what a lovely idea to go away and enjoy someone else's village, sounds like it was a fun time. Lovely page too.

Sounds (and looks) like you had a brilliant time Jo :o)
Fi xx

Oh, I remember playing that game :) Congrats to Maddie and Lynne on their win(s)!

we've played that one too before! great story and layout Jo x

Yes, that game is fantastic. We then have the second game, who can unwrap them the quickest :)

What a great Halloween and wonderful layout. Love the Mummy! I remember dressing my eldest daughter about 30 years ago in loo roll, and then she couldn't get in the car to go to the party. She still reminds me how embarrassing it was!

I used to love halloween when the children were small, this brought back some lovely memories...Thank you.

Love your layout and sounds like you had a load of fun!

Hurray for Fancy Dress winners! It's good to see you this month JO and with such a great story (and layout!) too. Brilliant.

Hocus Pocus is one of Kirsty's favourite films at this time of year too!...great LO
Alison xx

Stockbridge is lovely, we almost bought a house there! Sounds like a fun night and what a brilliant layout! SO good to see you back scrapping.

Looks like they did a fantastic job! Great layout!

great story and love the layout. sounds like a great party too!

Great layout, and I love the mummy game! Haven't played it for ages though. I'm making my kid's Halloween costumes this week, looking forward to it! x